The writers at the Mirror would like to wish all the readers a Merry Christmas and Happy New Year, and this year we have our rendition of Twas The Night Before Christmas:

Twas the night before Christmas, and everybody was glad,
My guests were all partying, everyone at my pad.
Cigars and liquor placed by the chimney with care,
Since Santa wanted the good stuff, and said to put it there.

My best friend was sloshed, so he went to bed,
While other people at the party, thought he was dead.
And my girlfriend with her broken English, and I with my stare,
Looked at her often, for her completing a sentence was rare.

When out on the street there arose such a clatter,
I sprang from the party to see what was the matter.
Away to the outside I flew like a flash.
Tore open the door and left from the bash.

The moon on the breast of the new-fallen snow
Gave the lustre of mid-day to objects below.
When, what to my wondering eyes should appear,
Santa arguing with an American woman over here.

He told her to get lost, so lively and quick,
I knew in a moment it must be St Nick.
More rapid than eagles his coursers they came,
Even his reindeer told her she was lame.

"Now Dasher! now, Dancer! now, Prancer and Vixen!
On, Comet! On, Cupid! on, on Donner and Blitzen!
To the top of the porch! to the top of the wall,
If we don’t get out of here, she’ll accuse us all.”

As dry leaves that before the wild hurricane fly,
When they meet with an obstacle, mount to the sky.
So up to my house-top the coursers they flew,
I yelled at Santa, “Parking in the driveway for you”.

And then, in a twinkling, I heard on the cement
Santa parking, I called for refreshments to be sent.
As I drew in my head, and was turning around,
Down the driveway St. Nicholas came with a bound.

He was dressed all in fur, from his head to his foot,
And his clothes were all tarnished with ashes and soot.
A bundle of goods he had flung on his back,
And said, “That American woman got nothing from my sack!”

His eyes-how they flashed! his dimples like lead!
His cheeks were like fire, his nose how red!
His droll little mouth was drawn up like a bow,
As he said “I should have thrown her in the snow.”

The stump of a pipe he held tight in his teeth,
And the smoke it encircled his head like a wreath.
He had a broad face and a little round belly,
He needed to lay off the jam and the jelly.

He was chubby and plump, a right jolly old elf,
And I laughed when I saw him, in spite of myself!
A wink of his eye and a twist of his head,
Soon gave me to know I had nothing to dread.

He spoke some more words, as he attended to his work,
Told the guests American women are mean, and glad he was a jerk.
And laying the gifts by the tree,
We all nodded to agree.

Then he sprang to his sleigh, to his team gave a whistle,
And away they all flew like the down of a thistle.
But I heard him exclaim, as he drove out of sight,
Merry Christmas to all, and to all a good night!"
¶ 12:19 PM
Thursday, December 20, 2007
Perspective 124 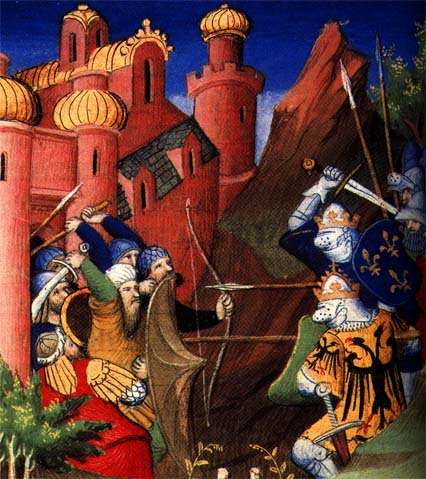 Recently, we have seen in the news, articles about Muslims and their honor killings as in this article. I would argue that someone who strangles a 16-year old girl is not a strong man, but rather a weak one, and a pawn at that.

Let me give you two examples:

Suppose I am religious. I borrow your car. I put a dent in it. You ask me if I dented it. I say yes, not because I respect truth or even you. I say yes because I think God is going to send me down for lying. Since I want to go to heaven, I admit I dented your car. The moral behavior in this example is the person told the truth, the moral reasoning was completely selfish. You, the owner of the damaged goods, is not even part of it.

In Islam, where men's mental masculinity is arrested -- nay, sanctioned to remain -- at the age of 13, independent thinking is not a common commodity, whereas Christianity has moved on from such a state in general.

Some scholars have concluded that Islam is feminine in nature - due to the violence associated with it and transmitted through its male members (the feminine is always more violent and uses proxy to accomplish its means - Muslims could well be said to be pawns of a hidden queen in Islam), whereas Christianity is masculine in nature (the masculine is always less violent than the feminine and requires no proxy but exerts itself when violence is needed for the sake of justice).  ¶ 7:41 AM
Tuesday, December 11, 2007
Exit Stage Right

Television continues to burn down.

The news story above speaks of falling ratings, reimbursements to advertisers, various program strategies to supposedly remedy this (more misandrist, woman=good/man=bad, female-oriented television, etc.) and so on, while "experts" and "analysts" remain clueless for reasons why. When the television media decided to take a misandrist and female-oriented position for its modus operandi (in parallel to the increasingly amount of women running television media), and subsequently alienating half its audience (men), that is when the fire started...thus began the movement of men to exit stage right from television audiences.

Not that I really ever watched TV, it has always sucked, but it just sucks more now than ever.  ¶ 8:35 AM
Saturday, December 8, 2007
Engineering Your Life...System, Process, and Product

The failure of the most people in general with their lives that I've encountered, as I roam about the world, stems from the fact that their whole system and processes in which they operate and act in are complete failures.


They will blame this or that, but they never address the fact, that their system (their way of life) and the subsequent processes (the actions that determine their way of life), and final product (their life itself) are all total crap.

Suppose you have a good system in place (way of life) but lousy processes (bad decisions or actions) not congruent with your system, thus you will end up with a crap filled life (bad product).

And the same with a bad system, but good processes - you still get a crap product.

For example, suppose I am good manager of my money - the process - I save, keep my spending under control, have a budget, etc., but every time I deposit my money into the bank - the system - the bank loses it. What good are my spendthrift actions with a bad bank? I end up with no money and I am broke - a bad product.

Thus, identifying what is wrong - bad system and/or bad processes, and correcting both, will ultimately give you a good product (a good life).

This might sound very elementary, but if that was the case, how come so many people have such miserable lives? I am starting to believe the saying "Imagine that half of the people in the world are stupid, then realize it's much more than that and they are even more stupider than thought."

Or worse, they are operating on false premises that such and such a system (way of life) is correct and the processes (actions) are correct as well, and never realize they keep producing a total crap product (their life).

And why not? Everybody else is? They have no idea what a good product looks like (a good life).

Moreover, this is why society at large, probably worldwide, does not like single men, single men aren't miserable, they have total freedom from responsibility except to themselves, and roam about the whole world as they see fit.

Society demands that single men also make crap products (have a miserable life) like everybody else. We can apply this concept anywhere, in any society, because people don't like others having fun, and are always out to steal the joy from genuinely content people.

Obviously, the classical example would the Anglosphere (although I'm sure we can find other examples outside of it) :

Get married and lose all your rights as man!

Have kids and realize they aren't yours!

Enjoy your fat wife and never have sex again!

When single men actually think something is wrong with them for making good product (having a good life), that really bothers me, and I am surprised to find quite a few single men thinking that way.

There is nothing wrong with having a good life, and even being envied for it - that means you are doing the right thing - in the words of Salvador Dali, "The thermometer of success is the jealousy of the malcontents".

Misery wants company, and there are a lot of miserable people looking for it. Don't give them that opportunity to enter your presence of greatness. Quality does have a price, and miserable people can't afford it.  ¶ 7:24 AM
Friday, December 7, 2007
Update - The Mirror Shall Continue

The Cool Tools For Men team has invited yours truly to join them as a contributor on their blog, which is greatly appreciated and accepted with great honor, since as noted below, if and when the Mirror gets shattered by the evil forces that temporarily took it out recently, it will carry on in the spirit and power thereof over at that great site. So whether here, as for now so far, or over at Cool Tools For Men, the Mirror shall continue.  ¶ 11:31 AM
Tuesday, December 4, 2007
Note To The Readers

The powers that be at Google, or the robots maybe, had locked out my blog for a while for "review" and possible terms of service violations which would lead to the deletion of this blog. Unfortunately, mirrors are glass and glass does shatter, especially if people don't like what they see.

Hence, I have not been able to update it until now with this post after following some procedures to get it unlocked.

Either way, if my blog gets deleted sometime in the future for whatever reasons, realize there was no conspiracy, no government agents raided my home or livelihood, etc., Google just vaporized it for whatever reasons - hey, this is a free blog so Google giveth and Google taketh away - and I am perfectly well and can be found living a grand lifestyle with occasional posts now and then at the Cool Tools 4 Men Forum.

This being said, I will continue to update this blog as is my custom - usually on the weekends as time permits.  ¶ 6:01 AM
The Bright Mirror reflecting masculinity for men. Saving your ass from the Matriarchy whether you like it or not. Shattering delusions so reality is clearly seen. You are ready, and the master has appeared.